By SprueWhisperer - February 05, 2016
Whilst, technically, not the first post about this miniature, I thought I should separate him out from the general noise of the other 12+ posts about simple Legionnaires and focus on this character model, especially seeing the Wolf Priest Legion Consul Chaplain is complete and the Legionnaire progress will take up a bunch of posts.

Anyways, Last time I posted about this miniature was way back in November/December 2015, right after Betrayal at Calth dropped.

Anyways, just to jog the memory, this was where I had left off. Base coat colors were down, I was still opting for a Vallejo Sombre Grey base, at this stage. I may still continue color this for Character models, so they are compatible and more uniform looking when swapping between 30k and 40k. 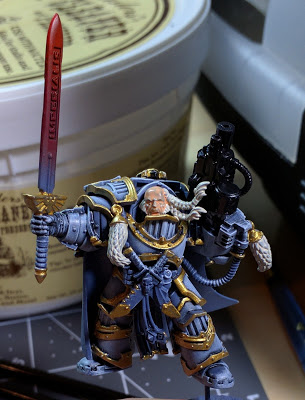 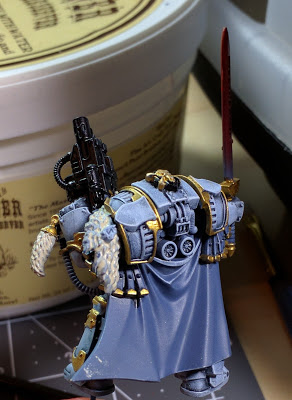 After edge highlighting the model I still didn't feel that it was "Wolfie" enough, so I green stuffed a fur pelt to his cloak. Another thing you'll notice, is that I was still not sure about what color to do the Paragon Blade, as I was tossing up the idea of Red, Green or Standard Blue. 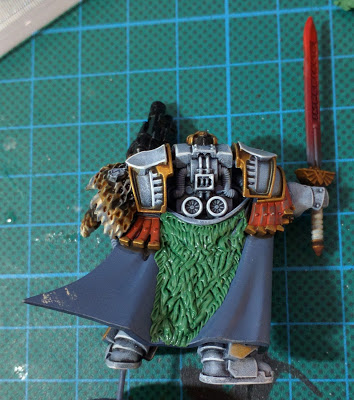 While I was air-brushing the claws for the Contemptor Dreadnought, I basically came to the conclusion of doing away with a funky blade transition and stayed with the standard blue. Bringing us to where Dagr, Praetor of the Rout Sjau/Sept (Seventh Company) 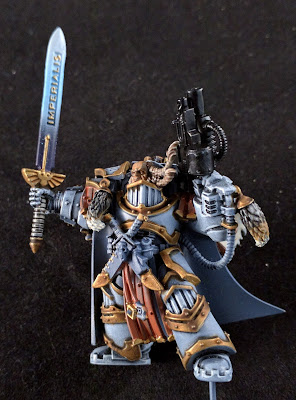 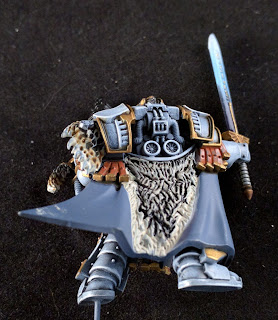 Still a bunch more work to do on him. Got to work out a better leather formula, etc.