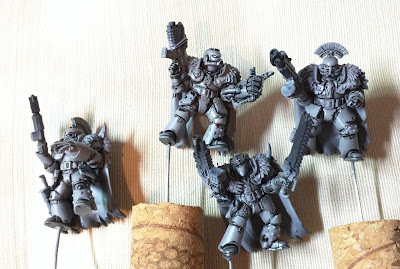 You'll notice that I went for a more grey color to the Space Wolves, following the fluff from the Heresy period. The more stylized blue didn't creep in until later in the 41st millennium, I am guessing. But the basic method to how I will paint these guys is the same. Instead of Vallejo Game Air Sombre Grey, I used Vallejo Game Air Cold Grey. I did a light mist of Sombre Grey, zenithal, later and ever so subtlety, just to give the color a bit more depth.

While I was waiting for the blacklining wash to dry on the 25 Legionnaires, I tucked into the bases. It actually kicked of a bit of basing mania for me, to be honest, you would have seen the posts about the flying stand and the terrain, by now, hopefully. If not ... spoiler alert.

So the Bases are done, the same way as you may have seen, a bit of cork, with grit/ballast, all glued down with PVA. Instead of using the German Sea Grey Primer, I went for the Badger Stynlres Black Primer.

Now all I have left to do is go back in and add Army Painter Winter Tufts and the bases will be uniform with the 40k Blood Claws and Shield Brothers bases.

Oh and rinse and repeat that for about 30 odd pieces. 25 x 32mm bases for Legionnaires,  Storm Wolf Flying Stand and the terrain pieces. This could take a few hours.