By SprueWhisperer - October 06, 2015
Arjac's Shield Brothers are perhaps the hardest formation in the current codex.

Arjac grouped with some of his brothers armed with Thunder Hammers, Storm Shields in Tactical Dreadnought armor (terminators), all piled into a Land Raider Crusader.

His Brothers get First Among Equals, Kingsguard and Sagaborn plus Hammer of Wrath. Additionally,  the Brothers get Fearless, if Logan is included and alive and Zealot if he gets killed. The group also gets Shieldwall, which is the same as the Deathwing Knights rule but if you make close combat invulvnerable saves on 6s and you inflict S8 AP2 hits in return.

Given I am already working on Arjac, I thought I would start putting together a Shield Brothers team together, with a Land Raider of course. And that's where my usual need to kitbash has kicked in.

Arjac is a Man Mountain, the Anvil of Fenris, Grimnar's Champion. In my opinion, Arjac would not drive around a simple Land Raider Crusader. Arjac would drive a Land Raider fit for Grimnar, himself.

So taking this idea, I trawled around for some true scale Land Raider concepts,
and stumbled on a picture of the Helbrecht Pattern Land Raider. 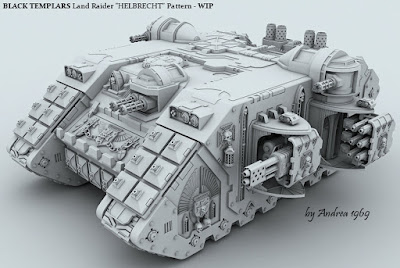 I also found a second variant from the same blog, an easier and more achievable conversion. ﻿ 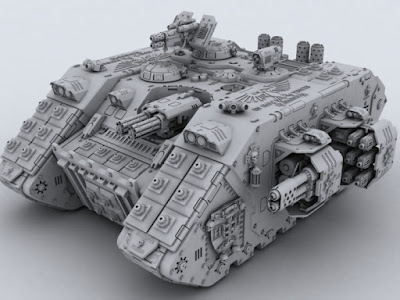 But I am looking for something that would accommodate the Man Mountain, himself. So what would happen if I combined the general bad-ass look of the Helbrecht, with the size of the a true scale Land Raider. Then I found this article on Space-Wolves-Grey. 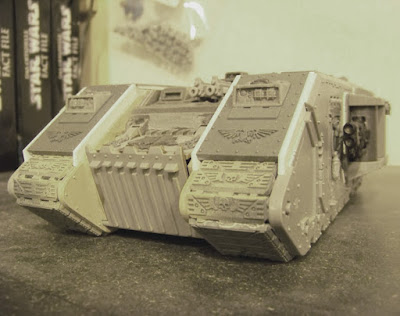